Castlepark and James' Fort (right middle distance). Compass Hill (on the left) was used by MountJoy as a placement for guns to bombard the Spaniards in Castlepark during the early stages of the siege. In the later assault by foot soldiers, the English forces had first to ford the Bandon river some miles upriver. The Battle of Kinsale itself was also fought on a creek of this river approximately 3 miles upstream (left) of the bridge pictured above. 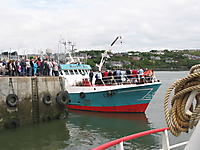