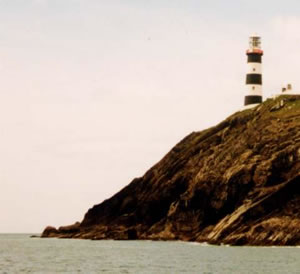 The Old Head of Kinsale lighthouse is situated at the very tip of the Old Head Peninsula. It's geology is Classier bedded sandstone and minor mudstone. It's position is...

There have been references to a beacon of some form at the Old Head in Pre-Christian Times. However, the first lighthouse proper here was built in 1665. It was one of six built around the Irish coast by a Sir Robert Reading. and consisted basically of a cottage with a coal-fired chauffer or brazier on it's roof for lighting. Service was poor and caused many complaints.

The Old head has had it's share of wrecks. Below is a list that we hope to add to in time...details we mean!!