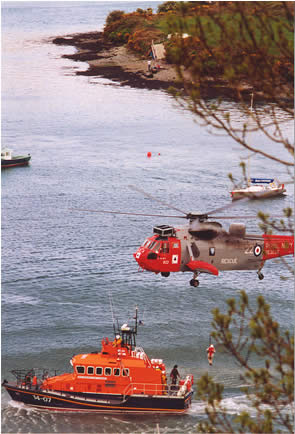 After many years of fund raising activities and the unseen preparatory work that in involved in setting up a lifeboat station, 2002 saw the announcement that Kinsale is to get an Atlantic 75 inshore lifeboat.

Initially the boat will be based on the Kinsale Yacht Club marina. The boat is operational from early Summer 2002. Plans are afoot for the building of a purpose built Lifeboat station and launching hoist near the old Fisherman's wharf. The helmsmen having been selected were trained in Feb.2003 at the RNLI's inshore lifeboat training facility on the Isle of Wight, England

If you are fit, under 45 and interested in joining the crew of the Kinsale RNLI boat then contact the harbour master in the first instance. However, there is always a requirement for assistance in a multitude of 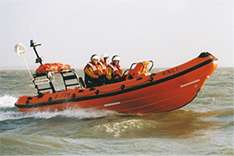 areas for people of all ages. So, please contact the harbour master for details.

Training takes place regularly in the RNLI service. A typical example is in the photo to the right here. The training also involves cooperative exercises with the various emergency services such as the Irish Coast Guard Service, the Irish Navy, the Aer Córp,the Royal Air Force, the Coastal Rescue service, the Cliff Rescue service, the Gardai and others. So, you would really be part of a very large team. It is a very worthwhile and interesting organization.