To anyone starting to study birds in Ireland, Gulls are great. Why? Because they occur so 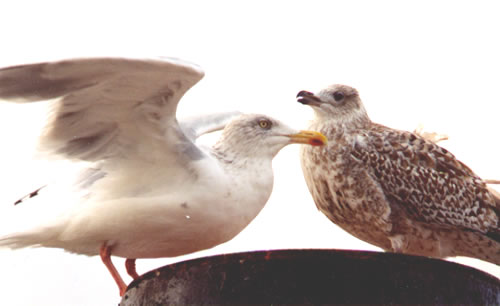 often near man they are very approachable and because they are to be seen throughout the country and not just the coast. With over 16 species to be seen over the year - each with between 2 and 4 year growing periods - they are great to learn the skill of bird identification and appreciate variations in plumage. So, they are worth studying for general interest as well as for themselves.

They breed near the water's edge. Generally their nests are simply made of twig and vegetation laid on open ground. However Herring Gulls enjoy nesting in cliff-faces and uninhabited islands. See the huge numbers fight for space atop the cliffs over 50' above sea level on the Sovereign rocks outside Kinsale harbour, yet ignore the low-lying Bream rock that barely reaches 15' above sea-level - which is the home to many cormorants and shags, and in Summer Guillemots.

Unlike ducks generally, cranes and some other birds that loose their feathers in a very brief period - leaving them unable to fly for the period, gulls moult slowly over the year and thus avoid any period of flightless vulnerability. Their newest coat appears in Winter and this is probably the best time to enjoy their plumage. Over the year their feathers are bleached by the sun and abraded generally and can sometimes appear quiet ragged.

In the photo can be seen a mature herring gull, (4 years or older) in the (left) foreground with his gray wing-top plumage fully developed, pink legs, yellow beak with red dot on lower tip, yellow iris and white underneath. In the background is a juvenile herring gull (1st year gull). The difference in plumage is stark and these gulls go through 4 distinct stages in their first 4 years. They are very, very like the yellow legged gull - the only clearly obvious distinction being their pink legs. Herring Gulls are among the largest of gulls and their lack of shyness has them appearing on city dumps and such places where they can scavenge.

Kinsale Angling arranges visits for bird-watchers and lovers of wildlife. Please Contact us in advance so that we can organize a trip to suit your parties wishes and requirements. We would love to hear from you.