There are two types of seals in Ireland - the gray seal (a.k.a. horsehead seal) and the Harbour Seal (a.k.a. the common seal).

Gray seals live in cold water in the Atlantic Ocean and Baltic Sea. In the western Atlantic, the population is distributed from the Labrador Sea in northern Canada down to the Gulf of Maine. In the eastern Atlantic, the gray seal is concentrated around the United Kingdom and Ireland but is also present around Iceland, the Faroe Islands, and Norway. There is a third stock in the Baltic Sea.

There is a large breeding area on Lambay Island, Dublin. During the winter months grey seals can be seen hauled out on the rocks, islands, and shoals not far from shore, and occasionally coming ashore to rest. In the spring the recently weaned pups and yearlings occasionally strand on beaches after becoming "lost."

An aerial/ground study in 2003 found both gray and, to a lesser extent, harbour seals near Kinsale.

The average daily food requirement is estimated to be 5 kg (11 lb), (mostly benthic or demersal fish and the occasional bird!), though the seal does not feed every day and it fasts during the breeding season. 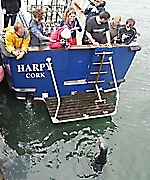 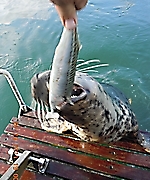 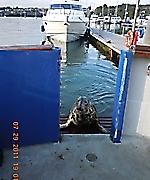 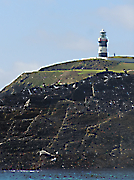