Some time ago I was testing a new side-scan sonar in Kinsale for an upcoming underwater survey. The seabed in Kinsale harbour is reasonably uniform - long tracts of sandy gravel mixed with shell and mud. Interspaced ins this are smaller rippling sandbanks which sidle up against low rocky seafloor formations. The side-scan sonar being tested was towed about 20 metres behind HARPY at about 3.5 knots. Monotonously the sonar was dispensing a reasonably uniform image of this seafloor on a computer screen when suddenly a darker shape morphed into view. It was large and even at the long sonar range being displayed on-screen, the object was still clearly identifiable - a very large anchor of the old Royal Navy long-shanked admiralty-type or, given the peculiar extremely sharp-angled throat, possibly of French design. The Underwater Archaeology Unit (UAU) of the National Monuments Section of the Department of Arts, Heritage and the Gaeltacht was immediately contacted and they are following the progress of this case.

Where did the anchor come from?  One has to guess at this point. There was no wreckage found in the general area so one possibility is that the anchor cable was cut to allow the vessel to leave in a hurry.  Perhaps a storm blew up suddenly leaving the vessel which was anchored close to the shore very little options but to leave immediately for the safety of deeper waters offshore. Maybe an enemy vessel was spotted on the horizon and the possibility of a prize vessel was too tempting to delay for the time-consuming, labour-intensive process of weighing anchor. Maybe the anchor itself failed structurally. Whatever the cause hopefully time will tell, but whatever the reason it was serious enough to sacrifice such a valuable piece of equipment - costly financially but also a huge safety asset whenever caught off a lee shore in high winds.

The images here are from dives I made in 2020 on this anchor. Regrettably on the days the photographs were taken the light was poor and the high turbidity compounded the problem, so apologies for the poor quality of the images. There are videos available also at https://kinsaleangling.com/videos/category/old-anchor-found-in-kinsale but they too were taken in the same conditions.

To help get some reference point on the anchor, note the two ranging rods placed tip-to-tip at the meeting point of the shank and the left arm, (looking along the shank towards the crown). The ranging rods are 2m in length and have alternating red and white bands of 500mm.  The overall length of the anchor from tip of crown to top of shank is just about 13' as can be seen from the measuring tape in the videos.  The length from the tip of crown to the tip of fluke is 6'6". Concretions are not heavy but will have affected the figures above to a small extent.

So, where to now? Well, we are working on that and will keep you posted. So please stay tuned...

There are 12 images in category 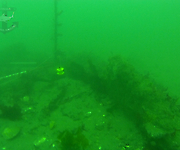 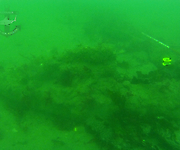 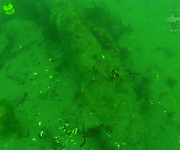 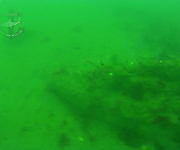 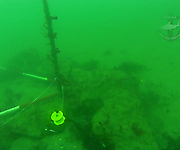 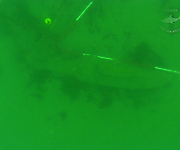 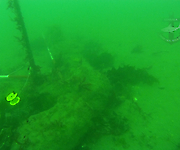 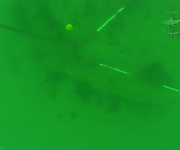 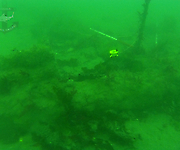 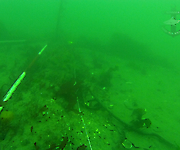 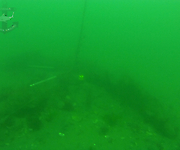 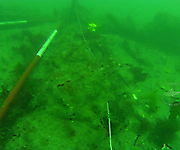 There are 12 images in category