The Old Head of Kinsale lighthouse is situated at the very tip of the Old Head Peninsula. It's geology is Classier bedded sandstone and minor mudstone. It's position is:

There have been references to a beacon of some form at the Old Head in Pre-Christian Times. However, the first lighthouse proper here was built in 1665. It was one of six built around the Irish coast by a Sir Robert Reading. and consisted basically of a cottage with a coal-fired chauffer or brazier on it's roof for lighting. Service was poor and caused many complaints.

Robert Reading's designed lighthouse built at Old Head. It's design is unique to Ireland. Service slated by many shipping companies. The "light" consisted of a brazier atop the cottage roof.

New lighthouse built by the newly appointed "Corporation for Preserving and Improving the Port of Dublin" under the energetic direction of a Mr.George Halpin. The new lighthouse consisted of a tower 42' high with a concentric Keepers' accommodation area at the base where 2 keepers were housed.

Illumination was provided by 27 Agrand oil lamps, each having a parabolic reflector. The light was 294' above sea level and could be seen at a range of 23 nautical miles.

Fog frequently obscured the light due to it's height above sea level. George Halpin again oversees the building of a new lighthouse - the current model - at a lower level. On completion the older house is partially demolished - it's ruins are still to be clearly seen.

A fog signal of 3 cannon added. Staff increase to 3 with the new fog signalman.

New optics added and new clockwork mechanism to rotate the optics. The light was generated by vapourised paraffin which provided a double flash every 10 seconds. The clockwork mechanism was provided by pendulums that slowly dropped through several floors of the tower - the chamber still exists.

1930:
The present colour scheme of black tower and 2 white bands replaces the original scheme of white tower with 2 red bands.

1972:
Electric power replaces the paraffin oil burning for illumination and a standby generator is installed as a backup system. The explosive charge fog signal is replaced by a manual siren.

1974:
The Daunt Rock lightship outside Cork harbour is decommissioned. As a direct result of this the Radio beacon is installed.

1985:
Electric fog horn added which is controlled by an automatic videograph fog detector.

2011:
Foghorns dicontinued on all lighthouses on Irish waters. 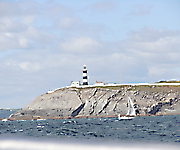 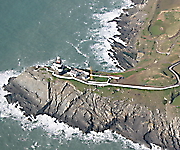 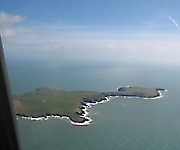