While we await to hear if that greatly-loved brigantine "Asgard II" will be raised, here are some athmospheric photos of her taken along with Kinsale Lifeboat on the evening of 09-Nov-2006.

At time of writing, 02-Oct-2008 she lies upright and apparently in relatively good condition in 80 metres off the French coast. The ROV (Robotically Operated Vehicle) survey noted that one of the hull's planks had sprung, but it cannot be determined whether this occurred at or after the time of sinking. Insured for €3M it is hoped she will be raised. At a time when the economy needs uplifting, raising the Asgard II would be a wonderful, symbolic and inspiring touch.

POSTSCRIPT: The Irish Government received a full insurance settlement for the Asgard II. It was immediately put into state coffers and not sent to "Coiste an Asgard". Also, the Irish government asked the French authorities to intervene against a group of volunteer Irish technical divers, diving in French waters on the wreck with the openly declared and sole purpose of ascertaining the state of the wreck for recovery FOR THE IRISH STATE. I wrote to the Irish government shortly after the loss of ASGARD II that there was a venerable schooner of 1900, just completely restored - the "KATHLEEN & MAY" - for sale for £1M at Bideford in North Devon. It would have been a fantastic bargain and also a schooner with great Irish connections having been owned from 1902 by Waterford owners. No reply was received from the minister. 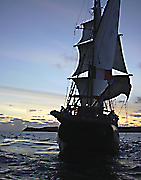 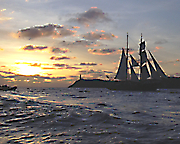 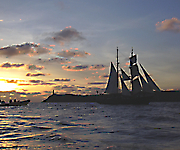 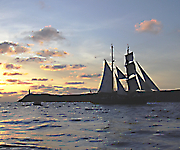 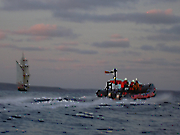 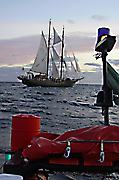