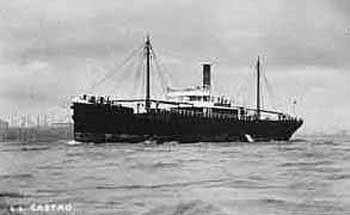 Previous
Image 3 of 31
Next

The AUD arrived in Tralee Bay on the Thursday in the late afternoon, and loitered between Fenit and the Maherees for nearly twenty-four hours waiting for the agreed signal from the Irish pilot’s son, Mort O’Leary. Mort actually saw the ship but not expecting it until Sunday did not register its significance. Captain Spindler also failed to make any contact with Casement’s submarine.

The ship departed but not before being boarded by a Royal Navy armed trawler, SETTER II, which failed to notice the fake Norwegian crew and the cargo of arms under open hatches, and instead provided Spindler with up-to-date newspapers. Intent on staying for a while longer, the approach of a second British ship made Spindler take off. The Navy version of the Setter incident was a “bare mention of some kind of encounter” which suggests embarrassment on the part of Sir Lewis Bayly, the Queenstown Admiral, who, almost alone in Ireland, knew exactly what he was looking for as he was privy to the deciphered German messages about the Rising. (Dublin Castle was not told with enormous consequences).