The 16-gun sloop "La Trompeuse" was a prize ship captured from the French by the British in battle. She was repaired and placed under the command of command of Captain Joshua Rowley Watson (1772-1818), when the previous captain suddenly died. Posted to the Irish Station she served off the coast of Ireland and Wales in 1795.

This was Watson's first command. His luck with this new command was short lived. On 15/July/1796 and 8 months into her command, she grounded leaving Kinsale on the ebbing tide and later broke her back on Farmers Rock at the mouth of the harbour. Much of her was salvaged by the local Kinsale shipwards.

Though exonerated by the court-martial, Watson was left in the doldrums for a long time before receiving his next command. In this free time he continued to improve his painting and drawing skills. We are very fortunate to have available much of this work in the book by Kathleen A. Foster, "Captain Watson's travels in America. The sketchbook and diaries of Joshua Rowley Watson, 1772-1818 (University of Philadelphia Press, 1997)". Included in this book is a sketch drawn by Capt. Watson himself of his new and first charge, "La Trompeuse".

Kathleen Foster's book is the culmination of a lot of sleuthing on both sides of the Atlantic and documents Watson's backround and artistic development very well. He shows three artistic styles: technical/architectural, landscaping and lastly naval/marine draughtsmanship. Ink and watercolours were his mainstay.

One of La Trompeuse's anchors is to be seen to this day outside Kinsale Museum - at the rear of the building - along with some other artefacts from other wrecks. The anchor is amongst others, but is clearly recognisable as that anchor with a chain-wrapped shank.

Captian Joshua Rowley Watson designed and supervised the erection of an arch to the memory of Nelson on a headland at Castletownshend, Co. Cork, on 10/Nov/1805, while he was commanding the Sea Fencibles in the area. The arch was said to have been the first monument erected in Nelson's memory, (Battle of Trafalgar 21/Oct/1805), and to have been built of dry stone in a single day.(Note 1) The journal reports that it was built in 5 hours by Capt.Watson using 1200 men Sea Fencibles under his command on 10/Nov/1805. (Other reports are that is was the crew of a sloop stationed in the area which would be less in number). 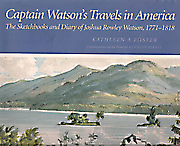 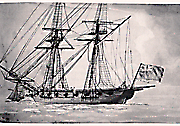 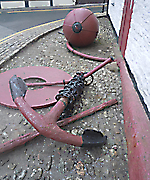 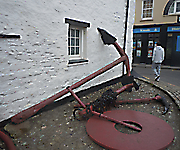