On July 8th, 1917, Pegu, on a voyage from Rangoon to Liverpool with a cargo of beans, rice and general cargo, was sunk by the German submarine U-57 (Carl-Siegfried Ritter von Georg), 7 miles southeast of Galley Head. 1 person was lost." -- thanks to Jan Lettens.

The loss I believe was the third engineer. It was thought that everyone had abandoned ship - it was later that he was missing. The ship is very, very broken after numerous attempts to raise timebers using mechanical grabs.

HARPY was involved in a site survey of the wreck and also bringing personnel to the reclimation barge in 2011. PEGU's cargo included burmese teak destined for the fortification of heavy gun emplacements in WW1 France/Belgium and attempts to raise some of these (alledgedly for the recently burned "Cutty Sark") was attempted in 2011. Some of the timbers recovered were in great condition, others were useless and "eaten" from the core outwards.

Her later namesake with the same company was lost by accident in the Formby/Crosby channel aproches to Liverpool in 1939, where her remains can still be seen at low water. Her bell is in Whiteacre Boarding School, Whalley, Clitheroe where her name is synonymous with "Please Everybody Get Up"! It was run to rise the boarders in the morning. 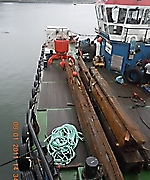 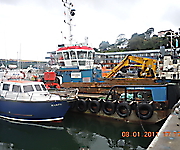 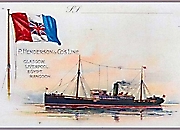