In the middle of July of 2018 I received a phone-call from the Kinsale Harbour-Master Julian Renault. The news was that a small yacht that had recently been storm-damaged had sunk in the harbour while under tow to safety. Searches both by divers and boatmen using grapples had failed to find the fibreglass constructed boat. Until it was found and dealt with the boat, (and perhaps its mast and its rigging), could pose a risk to the port's commercial and leisure craft. That was the pressing problem that faced the harbour-master that morning.

He was aware of our survey equipment and hence the call. Luckily we were just after a survey for NUIG Galway and all the equipment was still aboard and ready. And so after collecting a few grapples to mark the wreck we went to work. After an hour or so the wreck was found - the side scan images from this search are below. The wreck was marked with two buoys, notes were made on the wreck layout and my work was done. If you look closely at the side-scan sonar images you will observe part of the mast laying over the starboard side. What is NOT visible in those images are the fenders, buoys and warps that are still attached to the vessel but floating some feet upwards towards the surface with their risk of entanglement for divers. However, those dangers were seen on HARPY's fish finder/echo sounder - so BEWARE it is always best not to rely on just one piece of geophysical equipment.

Kinsale diver Graham Ferguson of OCEAN ADDICTS took over. Diving to the wreck he manoeuvered two strops beneath and back around it and sent them to the surface. Up topside aboard his trawler "RACHEL JAY", skipper Johnny Walsh was ready and a jury rig was made to the trawler's deck crane. Slowly and carefully the yacht was lifted until is lay just beneath the surface. Johnny and his crew could only wait until the incoming tide rose enough to allow the RACHEL JAY to drop its prize onto the slip by Kinsale's main pier. By now the vessel owner was on scene too and soon RACHEL JAY was in place over the slip and able to pass him a line attached to the casualty vessel. Again the yacht went to the bottom but this time slowly - under the safe control of the trawler's crane operator. With a line too to the shore all that was left was for the ebbing tide to give up the vessel so that inspection, decontamination and hopefully recovery could begin.

The vessel was refloated within a day but once again the harbour was safe for its usual busy traffic.

There are 7 images in category 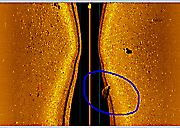 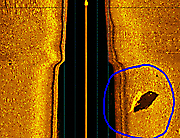 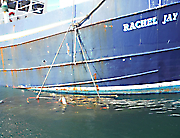 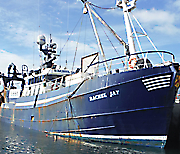 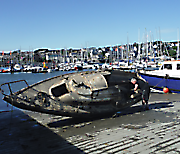 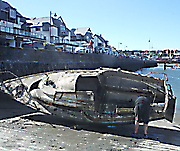 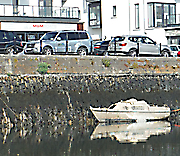 There are 7 images in category