Filming common dolphins about 4nm SE of the Old Head of Kinsale in September 2013. There was a large group of about 60 dolphins here travelling East. A large group (maybe the same) was seen travelling West a few days before. As they are capable of 30kts they had no difficulty playing about HARPY which was travelling at 15kts.  A wonderful sight to behold, (unless you are a mackerel). 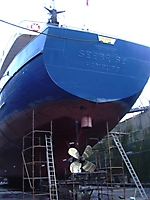