Wreck Site notes:
UC-42 sailed on her last patrol on 1 September 1917. On 31 October 1917 Torpedo Boat TB 055 was accompanying minesweepers operating at the entrance to Cork harbour. At 1500 hours an oil track was seen floating on the surface of the water. Following it to its source, TB 055 used its hydrophone to see if the oil was coming from a submarine. Loud mechanical sounds, of "hammering" and "turbine-like noises" were reported and, believing this to be a U-boat, a marker buoy was dropped, followed shortly after by a depth charge.

Following detonation of the charge, TB 055 returned to the area and found that the volume of floating oil had increased, and there were bubbles rising to the surface. TB 055 signaled the nearby armed minesweeper HMT Sarba for assistance. Sarba used her hydrophone but detected no sounds from the presumed submarine. A second depth charge was dropped and Sarba remained on station overnight. The following morning HMD Sunshine and TB 058 swept around the spot, to confirm that the incident had not been a false alarm caused by old wreckage. On 2 November oil was still coming to the surface and dockyard drivers arrived to inspect the assumed wreck. The divers reported a German U-boat lying on the seabed with her stern blown off, and a brass plate on her conning tower reading "C42, 1916" identified her as UC-42.

No survivors were ever reported even though some of the hatches were found to have been opened. It was thought likely that the submarine had been sunk by one of her own mines detonating under her stern while mine-laying.

The wreck was rediscovered on 6 November 2010 in 27m of water just off Roche's Point. It was found with "little obvious explosive damage". When the sinking and identification of the submarine was reported, the British Admiralty requested an identifiable item from the vessel for verification purposes, and in December 1917 divers recovered the telephone buoy from the conning tower. The Royal Nav y's Naval Intelligence Department were aware of submarine's 1 September departure date from Belgium and were sceptical about the hammering and engine noises reported by TB 055.

The Admiralty reported that "The longest known cruise of a UC boat in home waters is 24 days, so UC-42 must have been dead long before TB 055 and Sarba dropped the depth charges". (From Wikipedia, the free encyclopedia).

For a STILL IMAGES of this wreck see https://kinsaleangling.com/gallery/ships-and-boats/submarine-uc-42

Carroll
This comment was minimized by the moderator on the site

Hello all,
Please note that SubseaSurvey.IE's sonar equipment and their trained personnel are available for hire for wreck searching and imaging.
Phone 021-2429000.
Regards,
Carroll

TomD2000
This comment was minimized by the moderator on the site

TomD2000
There are no comments posted here yet 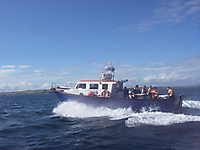